Recently I’ve been thinking about the state of contemporary photography. It’s probably related to reading Charlotte Cotton’s “The Photograph as Contemporary Art,” my interview with Tom Barrow, and Brian Steele’s response to the interview. I’m sure it’s also a reaction to my Arid Harvests photos, which are the first I’ve done in over 10 years that have me considering focal lengths, f-stops, film speed, color balance, etc.

The long version of my thought process is that this style of photography is very popular right now: 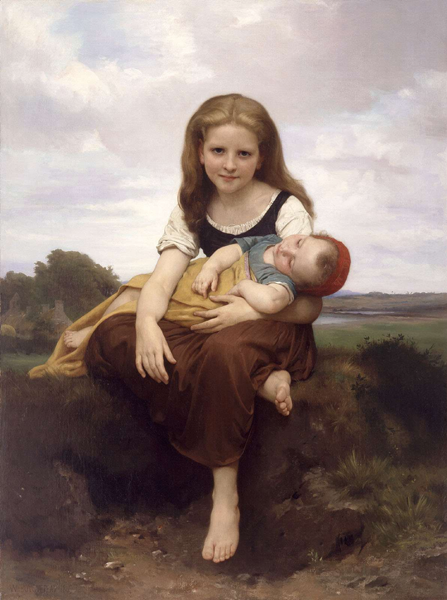 The above painting is by William Bouguereau, a student of the École des Beaux-Arts in Paris. I’m not sure how it happened, but this image fits in perfectly with the work of many contemporary photographers. Forget Eggelston and Shore; Bouguereau is where it’s at. Not convinced? This photograph, chosen by the San Francisco Museum of Modern Art’s Corey Keller, won the 2009 CENTER Single Image Competition: 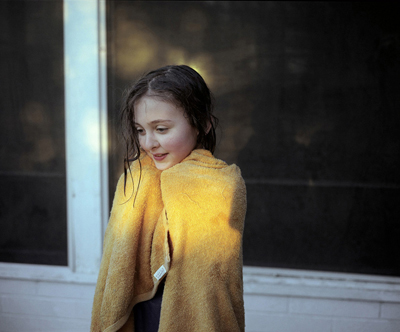 It’s pretty much the same image: soft lighting, intimate moment, young scamp. Aside from specific references to photography in her juror’s statement, it is otherwise difficult to determine if Ms. Keller is discussing “The Orange Towel” or “The Elder Sister:”

I was immediately drawn to this portrait for its honesty and quiet beauty. The connection between the photographer and her subject is apparent, and the moment and gesture are authentic. I appreciate the essentially photographic nature of this picture, the placement of the figure within the frame(s), and particularly the light that highlights the most mundane details, like the texture of the fraying terry toweling, while also conjuring the atmosphere of a late afternoon at the end of summer.

So my question is, why did a curator of photography at an institution like SFMOMA select such a visually conservative image? I don’t think there’s a single Bouguereau in the museum’s painting collection; rather you have the likes of Matisse, Braque, deKooning, Diebenkorn, and Johns. These are all artists that transformed what they saw and stripped away the literalness, thereby creating artwork that isn’t instantly absorbed and is infused with mystery. Most of the painters mentioned did their major works at least 40 years ago. They’re not exactly contemporary and what they brought to the table of visual expression is no longer new. This isn’t meant to drag out that mauled horse, the discussion of whether photography exists in the oppressive shadow of painting. It’s irrelevant; photography is clearly a respected art medium on its own. But why is it so stuck in its 19th century roots?

The above image is technically very straight forward; it’s a negative made with a camera, printed on silver paper and toned in chemicals. Yet it wonderfully frustrates many of the simple questions people want ask of photography: What is it? Have I been there? Couldn’t it be focused better?

There is a rich history of artists working to push the medium into new territory. The 1970s started the careers of John Baldessari and Betty Hahn; the 1980s Doug & Mike Starn, Holly Roberts, and Barbara Kruger. Richard Prince is in there somewhere too. The 2000s brought us Thomas Ruff, and Doug Keys. More recently, Curtis Mann and Chris McCaw are pushing the medium. The thing is, many of these artists don’t identify themselves as photographers, even though they work with the medium.

And why aren’t there more of them? I don’t understand why the last few years of the Critical Mass Top 50 has so much Bouguereau. Same for the recent CENTER Choice Awards. Maybe the question I’m struggling with is, why are so many advocates of contemporary photography still promoting pictures like it’s 1869?